Sausage is one of the oldest forms of processed food, having been mentioned in Homer’s Odyssey as far back as the 9th Century B.C.

Frankfurt-am-Main, Germany, is traditionally credited with originating the frankfurter. However, this claim is disputed by those who assert that the popular sausage known as a “dachshund” or “little-dog” sausage was created in the late 1600’s by Johann Georghehner, a butcher, living in Coburg, Germany. According to this report, Georghehner later traveled to Frankfurt to promote his new product.

Actually, in 1987, the city of Frankfurt celebrated the 500th birthday of the hot dog in that city. It’s said that the frankfurter was developed there in 1484, five years before Christopher Columbus set sail for the new world. Regardless the people of Vienna (Wien), Austria, point to the term “wiener” to prove their claim as the birthplace of the hot dog.

As it turns out, it is likely that the North American hot dog comes from a widespread common European sausage brought here by butchers of several nationalities. 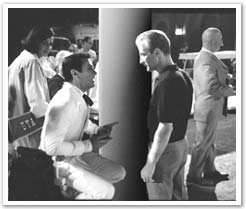 A young Dave with Tony Curtis on the set of the 1965 award winning movie “The Great Race”.

Also in doubt is who first served the dachshund sausage with a roll. One report says a German immigrant sold them, along with milk rolls and sauerkraut, from a push cart in New York City’s Bowery during th 1860’s. In 1871, Charles Feltman, a German butcher opened up the first Coney Island hot dog stand selling 3,684 dachshund sausages in a milk roll during his first year in business.

The year 1893 was an important date in hot dog history. In Chicago that year, the Colombian Exposition brought hordes of visitors who consumed large quantities of sausages sold by vendors. People liked this food that was easy to eat, convenient and inexpensive.

He loaned white gloves to his patrons to hold his piping hot sausages. Most of the gloves were not returned.  Today’s hot dog on a bun was probably introduced due to the gloves that were not returned.  As the supply of gloves began running low. He reportedly asked his brother-in-law, a baker, for help. The baker improvised long soft roll St. Louis “Louisiana Purchase Exposition” in 1904 by Bavarian concessionaire, Anton Feuchtwanger.

Frankfurters were not called hot dogs until a few years later.  It all started on a cold day at  the New York Polo Grounds where director of catering, Harry Stevens was having no luck selling ice cream and chilled soda.  He devised portable hot water tanks, filled them with frankfurters, and in a marketing stroke of genius, instructed his salesmen to call out, “They’re red hot! Get your sausages while they’re red hot!”.  American ingenuity prevailed again, and the newly popular sausage sandwiches became known as “red hots”.

In 1906 sports cartoonist Tad Dorgan was sitting in the Polo Grounds press box waiting for inspiration to strike.  Listening to the vendors and thinking of the German dogs the sausages resembled, he playfully drew a picture of a dachshund lounging in a bun – perhaps alluding to the scurrilous suggestion by some that “red hots” were made from the meat of dogs.  Dorgan was a great cartoonist but a poor speller, so instead of trying to spell dachshund he merely labeled his picture “Hot Dog”.  The name stuck, but vendors were horrified at the association to dogs.  At Coney Island, where sausages meant major revenue, merchants were not allowed to use the term “Hot Dog” until the furor died down years later.  By the time Franklin Delano Roosevelt publicly treated visiting heads of state to hot dogs, they were firmly established as America’s favorite hand-held food.

Coincidentally, a man named George T. French made a trip to a  St. Louis fair bringing a product of his own to display.  From that time on hot dogs and French’s Mustard (that’s what we use) became standard fare across the country.  Today the Hot Dog Council (yes, there is one) claims hot dogs are regularly eaten by 95% of American families with each of us eating an average of 80 franks a year.

Through the years, the old hot dog learned some new tricks.  Corn dogs were invented at the 1942 State Fair of Texas by Neil Fletcher who skewered franks on a stick, dipped them in cornmeal batter, and deep fried them.  Kansas Dogs are topped with melted cheese and Chicago Dogs are served in a poppy seed bun with choice of relishes.  Chili Dogs paddle around in a bun full of the spicy stuff, and split, deep fried Frizzled Dogs are a Baltimore specialty.

In Boston, a man name Howard Johnson started a business on the beach serving hot dogs and 28 different flavors of ice cream (think Baskin Robbins 32 flavors).  His hot dogs were grilled and he devised a method of making buns in a loaf which were then sliced on a special machine which left them cut in the center and cut so that there was no crust on the sides.  He then buttered and grilled the buns. Howard Johnson went on to establish a major restaurant chain and then a hotel chain which can still be found around the country.

At the Doghouse we use the best, hand-made, all beef hot dogs and prepare a special dough for our buns but we essentially follow the lead set by Howard Johnson more than 100 years ago.

Any way they are served, eating hot dogs has become an American pastime and they can no more be separated from our culinary identity than apple pie, which was also an import.  Hot dogs are America’s best friend!

AT DAVE’S THE DOGHOUSE, WE MAKE AMERICA’S FAVORITE FOOD BETTER